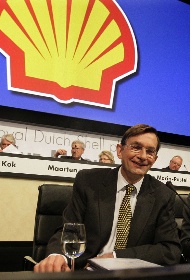 It should be incumbent on departing CEOs (at least those who leave in good standing)  to leave behind a public record of sorts on what they learned from holding one of the most difficult jobs. These are not easy times to be CEO and the lessons learned can help those coming aboard. In my book, CEO Capital, I ended it with this observation on the show-stopping power of this one question I always asked:
“If you were going to leave a note on your desk for your successor, what would it say?”

The McKinsey Quarterly recently had an interview with the departing CEO of Royal Dutch Shell, Jeroen van der Veer. He spent 38 years with the oil major  and took over from a disgraced CEO Phil Watts who overstated its proved oil and gas reserves by nearly 25 percent.  I remember when he took over during these tumultuous times and the criticism of him because he was an insider. However, he proved them wrong and managed to get Shell back on its feet and restore its reputation. Here are some salient points from the interview that touch on reputation, communications and leadership:

“The second one is communication. Not only internal communication—people feel uncertain, so they like to undersand how the bosses think about it –but external: with politicans, ministers. ..So you have to think a lot about communications. Externally and internally, what are your key messages.”

“The world is much more critical. And if you go from this ‘trust me’ to this ‘show me’ world, then it is very important that the senior leaders are very good communicators. I started as an engineer, so we all have to learn that over the years.”

“And if I look back sometimes I think, hang on, we should have made even more speed. Usually my regrets are those kinds of things.”

Rarely is there a CEO who says they wish they had moved more slowly. Usually they regret not moving faster. CEOs are also always cognizant of the state of the company’s reputation when they leave and how it compares to the time when they first became CEO.